There are some who believe that New Jerusalem is the bride of Christ based on these passages:

Revelation 21:1,2
And I saw a new heaven and a new earth: for the first heaven and the first earth were passed away; and there was no more sea. And I John saw the holy city, new Jerusalem, coming down from God out of heaven, prepared as a bride adorned for her husband. Revelation 21:9-11
And there came unto me one of the seven angels which had the seven vials full of the seven last plagues, and talked with me, saying, Come hither, I will shew thee the bride, the Lamb's wife. And he carried me away in the spirit to a great and high mountain, and shewed me that great city, the holy Jerusalem, descending out of heaven from God, having the glory of God: and her light was like unto a stone most precious, even like a jasper stone, clear as crystal;

If John is viewing all of the bride and the bride resides in New Jerusalem, then seeing the bride, the Lamb's wife as a whole would be to view them through the crystal clear New Jerusalem adorned as a bride for her husband.

Revelation 21:18
And the building of the wall of it was of jasper: and the city was pure gold, like unto clear glass.

Revelation 21:21-23
And the twelve gates were twelve pearls: every several gate was of one pearl: and the street of the city was pure gold, as it were transparent glass. And I saw no temple therein: for the Lord God Almighty and the Lamb are the temple of it. And the city had no need of the sun, neither of the moon, to shine in it: for the glory of God did lighten it, and the Lamb is the light thereof.

In addition, Malachi associates them that fear the Lord and think upon His name with jewels. To me it seems that when John is shown the Lamb's wife and sees New Jerusalem, the bride of Christ together dwelling in New Jerusalem are what is seen. I don't think it fits Biblically that New Jerusalem itself is the bride given the rest of this page.

Malachi 3:16,17
Then they that feared the Lord spake often one to another: and the Lord hearkened, and heard it, and a book of remembrance was written before Him for them that feared the Lord, and that though upon His name. And they shall be mine, saith the Lord of hosts, in that day when I make up my jewels; and I will spare them, as a man spareth his own son that serveth him.

The 12 gates of New Jerusalem mirror the 12 tribes Revelation 21:12 and the 12 foundations of it are named after the 12 disciples Revelation 21:14. This means New Jerusalem is designed around the people who founded God's people and represented God on the earth. These are all they who lived by faith. Why would the bride have parts of her named after these things? Wouldn't the bride be the center? You don't create a city that you marry that's named after the ones you love, you marry the ones you love and name cities after them.

This brings me to the second question. What is God's most precious creation? All of history is played out for the benefit of redemption of humans to God. All other things will pass away except those who love God. Marriage, in my mind, is based on love and that's what God is. He so loved us that He sent His only begotten Son to die for us. Do you marry a city or do you marry those created in your image, such that marriage is the joining of two into one. We have Christ in us when we place ourselves in Him by giving our lives to Him. So is the bride a city, or those people that love God?

I believe the convergence of these two is the answer. God loved us so much that He sent His Son who willingly died so we could live. When we accept that, He sends His Holy Spirit, the comforter, to be with us while He is preparing His Father's house with many mansions for when He comes back for us.

John 14:1-3
Let not your heart be troubled: ye believe in God, believe also in me. In my Father's house are many mansions: if it were not so, I would have told you. I go to prepare a place for you. And if I go and prepare a place for you, I will come again, and receive you unto myself; that where I am, there ye may be also.

He loves us so much and names the city gates of New Jerusalem after the 12 tribes of Israel, who were responsible for God's Word being available to us. It was through the Jews that salvation came, and it's through the gates named after them we must enter the city through.

The 12 disciples were the foundation for salvation being spread across the whole earth. So too are their names written on the foundations of the city of New Jerusalem, symbolic for the body. In this way, the beloved part of God's creation who obey His voice and love Him with all their hearts reside in the Father's house with many mansions. When New Jerusalem is adorned as a bride for her husband, it symbolizes the completed body, Christ the head (cornerstone) and we the body joined in marriage to one. It is the habitation of God, Christ, and all that are His, and apparently the only place that isn't destroyed before the new heavens and new earth. So it makes sense that New Jerusalem the city in which the bride resides would descend out of heaven AS a bride adorned for her husband and indeed represents the purpose of God's creation who reside inside of it with Him.

The Body of Christ

Christians are also called, as the church, the body of Christ. We are linked to the idea of being the body and Christ the head many times through scripture. Indeed, the communion we take as believers is a symbol of that and the marriage is when we are no longer two anymore, but married to Christ, one with Him. This is represented, I believe by New Jerusalem, a 1,500 mile cubed pyramid, with Christ represented in the capstone (chief cornerstone) and the body of the pyramid below it. Here are some more scriptures linking the church/body/bride under the Chief Cornerstone (Capstone)/Head/Groom.

Romans 7:4
Wherefore, my brethren, ye also are become dead to the law by the bodyG4983 of Christ; that ye should be married to another, even to him who is raised from the dead, that we should bring forth fruit unto God.

Ephesians 1:18-23
The eyes of your understanding being enlightened; that ye may know what is the hope of his calling, and what the riches of the glory of his inheritance in the saints, And what is the exceeding greatness of his power to us-ward who believe, according to the working of his mighty power, Which he wrought in Christ, when he raised him from the dead, and set him at his own right hand in the heavenly places, Far above all principality, and power, and might, and dominion, and every name that is named, not only in this world, but also in that which is to come: And hath put all things under his feet, and gave him to be the head over all things to the church, Which is his bodyG4983, the fulness of him that filleth all in all.

Ephesians 4:12
For the perfecting of the saints, for the work of the ministry, for the edifying of the bodyG4983 of Christ:

Ephesians 2:13-22
But now in Christ Jesus ye who sometimes were far off are made nigh [close] by the blood of Christ. For he is our peace, who hath made both one, and hath broken down the middle wall of partition between us;Having abolished in his flesh the enmity, even the law of commandments contained in ordinances; for to make in himself of twain one new man, so making peace; And that he might reconcile both unto God in one bodyG4983 by the cross, having slain the enmity thereby: And came and preached peace to you which were afar off, and to them that were nigh. For through him we both have access by one Spirit unto the Father. Now therefore ye are no more strangers and foreigners, but fellowcitizens with the saints, and of the household of God; And are built upon the foundation of the apostles and prophets, Jesus Christ himself being the chief corner stone; In whom all the building fitly framed together groweth unto an holy temple in the Lord: In whom ye also are builded together for an habitation of God through the Spirit.

1 Peter 2:6
Wherefore also it is contained in the scripture, Behold, I lay in Sion a chief corner stone, elect, precious: and he that believeth on him shall not be confounded. 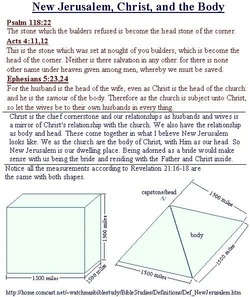 There is reason that this theory of the pyramid may be incorrect...

And the city lieth foursquareG5068, and the length is as large as the breadth: and he measured the city with the reed, twelve thousand furlongs. The length and the breadth and the height of it are equal. Foursquare (G5068)
tetragōnos (tet-rag'-on-nos)
From G5064 and G1137; four cornered, that is, square: - foursquare.

Is this "square" talking about the whole shape? Or by saying the city "lieth foursquare" does it mean that the base of it is a square? To be honest, I don't know, but the information I've shared leads me to just present what I've found and make it clear that I don't feel this is something we can know for sure and it really doesn't matter that much anyway. I found The Great Pyramid-Lost Legend of Enoch to lay out a very interesting possible connection to this theory. So continuing on...