Daniel 9:7...24  "Yhwh, you are righteous, but this day we are covered with shame--the men of Judah and people of Yahrusalem and all Israel, both near and far, in all the countries where you have scattered us because of our unfaithfulness to you....we have not obeyed  Yhwh our Elohim or kept the laws given us through his servants the prophets....all Israel has transgressed your law and turned away, refusing to obey you. "Therefore the curses and sworn judgments written in the Law of Moses, servant of Yhwh, have been poured out on us, because we have sinned against you... Elohim of Israel you did not hesitate to bring the disaster upon us, for you  Yhwh our Elohim are righteous in everything done; yet we have not obeyed (you)...O Yahweh, in keeping with all your righteous acts, turn away your anger and your wrath from Yahrusalem, your city, your holy hill. Our sins and the iniquities of our fathers have made Yahrusalem and your people an object of scorn to all those around us...Seventy 'sevens' are decreed for your people and your holy city to finish transgression, to put an end to sin, to atone for wickedness, to bring in everlasting righteousness, to seal up vision and prophecy and to anoint the most holy." 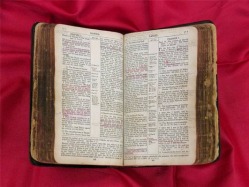 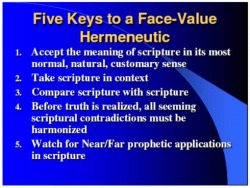 Through our brother Daniel,  Yhwh spoke concerning the forgiveness of Israel, in a dual-fulfillment prophecy. Line 9:24 reads...

“Seventy weeks are determined upon thy people and upon thy holy city, to 1)  finish the transgression, and to 2) make an end of sins, and to 3)  make reconciliation for iniquity, and to 4) bring in everlasting righteousness, and to 5)  seal up the vision and prophecy, and to 6) anoint the Most Holy.”

Here in very powerful words we see that Yhwh was going to allow Daniel’s people (all Israel, including Judah) "seventy weeks" to end their rebellion against Yhwh by doing 6 required things...and if they failed, Israel would be rejected as a nation in this dual-fulfillment prophecy.  Note the concepts above..."70 WEEKS" ...."TO FINISH THE TRANSGRESSION" ... "BRING IN EVERLASTING RIGHTEOUSNESS" ..."ANOINT THE MOST HOLY"...

The seventy weeks are of course a prophetic time in which each day of the week represents a literal hebrew year (Ezekiel 4:6 and Numbers 14:34), each of which consist of 360 days.  So, and letting scripture interpret itself,  these seventy weeks totalling 490 days would actually be a literal 490 years of 360 days, after which any disobedient and unrepentant Israelites, near and far, would no longer be forgiven nor considered Yhwh's people. As mentioned by Daniel, the seventy prophetic weeks were to begin with the decree to restore and rebuild Jerusalem, including its walls.

Proceed to Daniel 9:25...
“Know therefore and understand, that from the going forth of the commandment to restore and to build Yahrusalem unto the Messiah the Ruler shall be seven weeks (7 weeks=49 years), and threescore (+ 60 weeks=360 years) and two weeks (+ 2 weeks=14 years): the street shall be built again, and the wall, even in troublous times.”


That very well-known event began to take form in the year 457 B.C., when Artaxerxes sent out the  official decree to reconstruct as we see in Ezra 7:13, and was begun a few years later on 445 B.C. under the leadership of Nehemiah and finished 49 years later, in the year 409 B.C. as history proves.

Thus, counting from the  date the edict was given (representing "the going forth of the commandment" spoken by Daniel) to rebuild Yahrusalem in 457 B.C. onwards, the 423 years "unto Messiah the Ruler" takes us to the year 26 A.D., which was the year when Yahwshua was immersed and began his ministry as Priest and King and Lamb of Yhwh all at the same time.
Also, according to the prophecy, the People of Yhwh would have exactly 490 years ( 70 x 7 )  from 457 B.C. to put an end to their rebellion and pride towards Elohim and repent in order to be forgiven.

REVIEW INFO GIVEN IN VIDEO ABOVE, TO PLAY AND VIEW VIDEO CLICK ON PHOTO .


The initial fulfillment of this prophecy shows the 490-year probation time period for Israel,  Judah and scattered tribes, would have "expired" on 33 A.D., year of the stoning of Stephen, therefore on that scripturally-significant date the Jews would have ceased to be Yhwh’s chosen people!

But, because of Yhwh's mercy, that week was intended to be cut at midpoint as prophecied, with the worst-ever rebellion of the Jews to date, when they rejected and murdered Yahwshua The Annointed One in the year 30 A.D. Their rebellion has not yet been forgiven, but their time has not yet come up either..!
Yhwh planned that this would be cut at mid-week so that the faithful remnant He has reserved for the end will have a chance to repent during the time period He has chosen to call "the times of the gentiles".


Daniel further states about this prophetic event (in line 9:25) that the Messiah's anointement would take place after a total of sixty-nine of those 70 prophetic weeks had passed by. As mentioned earlier, this annointment would therefore take place 483 years from the decree date of 457 B.C.   It takes no mathematician to figure the fulfillment of that prediction---483 years after the year  457 B.C. unequivocally  brings us to the year A.D. 26  (keeping in mind there is no year "0")---the very date when Yahwshua was immersed by Yohanan and the Ruah Ha Kodesh anointed Him for His ministry!

The initial seven-week or 49 year period covers the reconstruction of Jerusalem in troublous times.  This construction period began with the command in Ezra 7:13 in the year 457 B.C. and continued for the next 49 years. Details of the troublous times are covered from Nehemiah 2 to 7. From this point to Messiah the Ruler would be another 434 years. This is the “Even in troublesome times”  referred to in Daniel 9:25


Since “Messiah” (in hebrew, Mashiach) means “Anointed One,” this can only be the fulfilment of Daniel’s prophecy that the Messiah would appear in A.D. 26 prepared for his ministry as Ruler. Seventy weeks were assigned to the Israel probation,  with  Yahwshua appearing as the Annointed of Yhwh after sixty nine weeks. That leaves the final and seventieth week for Yahwshua's  ministry before the Jews' probation ended. What was to happen in the seventieth week of this prophecy?

Daniel 9:27 tells us, “And he shall confirm the covenant with many for one week: and in the midst of the week he shall cause the sacrifice and the oblation to cease.”

This passage also has an initial and a latter-day fulfillment. 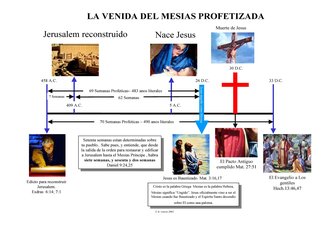 The “midst of the week” would be three and a half prophetic days (or 3.5 literal years) from His baptism and according to the Bible, the ministry of Jesus lasted for exactly that, three and a half years. In the spring of A.D. 31 Jesus was crucified and the veil of the temple was rent (Matthew 27:51), signifying the end of sacrifices. By His death He caused the “sacrifice and the oblation to cease.” Another three and a half years would lead up to the end of the seventy weeks and the end of Jewish probation. During that three and a half years the disciples laboured mainly for the Jews but in A.D. 34 the seventy weeks ended; Stephen was stoned after his immense speech before the council in Acts chapter 7 and the gospel began to go to the Gentiles (Acts 8:4). The Jews had rejected the gospel message and were no longer God’s chosen people just as Daniel had predicted. Now they could only be saved as individuals in exactly the same way as the Gentiles.

The seventy weeks or 490 years was the time God gave His chosen nation to end their rebellion where He would then forgive them for their transgressions. Notice how Jesus refers to this prophetic time period here in His conversation with Peter. Seventy times seven is of course 490.
These qualifiers are important, because they separate two other commands involving the rebuilding of the Temple but not the rebuilding of the city. 1. Cyrus, the king of Persia, commands the Temple to be rebuilt and allows the Jews to return in 539 B.C. (Ezra 1:1-11).2.  Artaxerxes, king of Persia, gives Ezra the priest a letter  permitting and encouraging Temple worship and sacrifice at Mt. Moriah, but not the rebuilding of the city and its walls in 458 B.C. (Ezra 7:11-26)

Daniel’s prayer took place in the first year of Darius, son of Xerxes, about 539-538 B.C.  Jerusalem was in ruins, without walls and a Temple, a shadow of it’s former glory.  The clock begins with the command regarding Jerusalem’s reconstruction.  Specifically, the walls and the street, the command actually comes 93 years later.  In the book of Nehemiah we have a record of the command.  Nehemiah was the cup bearer to the Persian king, Artaxerxes.  Nehemiah shared Daniel’s concern regarding the state of Jerusalem, 94 years after Daniel’s prayer.   His prayer was for the restoration of his people’s city.

The Temple was rebuilt in 516 B.C., but the Jews had little incentive to return to an un-walled city with little protection.  Nehemiah prayed for the city to be restored.

The king, seeing Nehemiah’s sadness, asked him why he looked sad?  Nehemiah told him, and Artaxerxes granted his request and gave Nehemiah (Nehemiah 2:1-8) orders to rebuild the city gates and walls.

1And it came to pass in the month of Nisan, in the twentieth year of King Artaxerxes, when wine was before him,…..I said to the king, “If it pleases the king, and if your servant has found favor in your sight, I ask that you send me to Judah, to the city of my fathers’ tombs, that I may rebuild it…..and a letter to Asaph the keeper of the king’s forest, that he must give me timber to make beams for the gates of the citadel which pertains to the temple, for the city wall,   Nehemiah 2:1,5,8                The order was given in March/April  444 B.C. The reign of Artaxerexes began in 464 B.C. his twentieth year would have bee 444 B.C.  The month of Nisan is the first year of the Jewish Calendar, equivalent to March/April.

God’s clock began to tick with the command by the king of Persia.

Matthew 18:21 “Then came Peter to him, and said, Lord, how oft shall my brother sin against me, and I forgive him? Till seven times? 22 Jesus saith unto him, I say not unto thee, Until seven times: but, Until seventy times seven.”

Now, to make the Jesuit manufactured prophecy fit its new interpretation, Daniel’s 70 Weeks prophecy of Daniel 9:24-27 which began in 457 B.C. with the decree to rebuild Jerusalem (Ezra 7:1-27) had to develop a “gap.” Arbitrarily the 70th week (7 days = 7 years) of Daniel’s prophecy is detached from its context and placed at the end of the age 2000 years later where it logically can no longer be the seventieth week. This “week” will according to its proponents constitute the “seven year tribulation period,” prior to which the Secret Rapture will occur.

This false and illogical “gap” theory states that all fulfilment of this prophecy is suspended until the Christian era is over. Then the last week of the 70 weeks prophecy becomes operative again constituting the seven year tribulation period. This false Jesuit manufactured theory teaches that the first sixty nine weeks of this seventy week prophecy (490 years) reached from 457 B.C. to the year 27 A.D. when Jesus began His ministry. The true “Historical” view teaches that the 70 weeks prophecy of Daniel 9 began in 457 B.C. and ended when Stephen was stoned to death in 34 A.D. It was at that time that the gospel went to the Gentiles and the Jewish people lost their place as those “Chosen” to spread God’s message to the world. They had also rejected Christ by calling for His crucifixion in the “middle of the week,” in 31 A.D. and then rejected Christ’s followers by stoning Stephen 3.5 years later at the end of the 70th week. (34 A.D.)