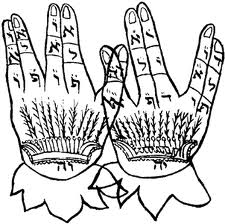 KABALLAH / CABALAH
AND ITS PAGAN ORIGINS

Following the division of  both  kingdoms of  Israel and the Assyrian captivity of the northern tribes,  the southern kingdom of Judah adopted the pagan traditions of the heathen nation of ancient Babylon.

These thousands of traditions, along with their associated rituals which included human sacrifice,  provoked   Yhwh Elojim  to judge the southern kingdom,   of which judgment the prophet Yeremiyah  forewarned the Jews for a period of forty years,   all to no avail.

The Babylonians destroyed  the Holy City of  Jerusalem in three stages, from 605 to 586 BC,   in which year the Temple of Solomon was finally  demolished and the remaining Jews were carried into captivity.

During the Babylonian captivity of Judah,   the prophet Ezekiel continued to reprove Judah for its apostasy from the Elohim of Israel and for  their love affair with Babylon.

Note  in the following passage,  the Jews' admiration for the images of rich, brightly attired Babylonian princes,  which evoke visual images of the elegant processions of the princes of the Roman Catholic Church attired in their rich and colorful vestments:

“...[Jerusalem] increased her whoredoms:  for when she saw men pourtrayed upon the wall,  the images of the Chaldeans pourtrayed with vermilion,  girded with girdles upon their loins,  exceeding in dyed attire upon their heads,  all of them princes to look to, after the manner of the Babylonians of Chaldea,   the land of their nativity:
And as soon as she saw them with her eyes, she doted upon them, and sent messengers unto them into Chaldea.

And the Babylonians came to her into the bed of love, and they defiled her with their whoredom,   and she was polluted with them, and her mind was alienated from them.


Moreover, as  Matthew Henry noted in his commentary on this passage, the kingdom of Judah patterned its own worship after the pomp and pageantry of the Babylonians with whom they had become enamored:

“Thus she increased her whoredoms; she fell in love,  and fell in  the same league  with the Chaldeans."

Hezekiah himself was faulty this way when he was proud of the court which the king of Babylon made to his honor  and  for complimting his ambassadors with the sight of all his treasures.  (Isa. 39:2)

"And the humour increased  (v. 14);  she doted upon the paintings of the Babylonian captains (v. 15, 16),   joined in alliance with that kingdom, invited them to come and settle in Jerusalem, that they might refine the genius of the Jewish nation and make it more polite;  worse even,  they sent for patterns of their images, altars, and temples, and made use of them in their worship.
Thus was she polluted with her whoredoms (v. 17), and thereby she discovered her own whoredom (v. 18), her own strong inclination to idolatry.”

According to two authoritative sources, HP Blavatsky and their own  Jewish Encyclopedia, the Jews also acquired from the Chaldeans their doctrines of Eastern mysticism.    These were later developed into a written compendium of esoteric literature known as the Jewish Qabbalah or Kabalah, and in the Middle Ages as the Latin Cabala.

“Kabalah (Hebrew),  The hidden wisdom of the Hebrew Rabbis of the middle ages derived from the older secret doctrines concerning divine things and cosmogony, which were combined into a theology after the time of the captivity of the Jews in Babylon.

All the works that fall under the esoteric category are termed Kabalistic.” (Blavatsky, Theosophical Glossary, p. 168)

“The Pythagorean idea of the creative powers of numbers and letters, upon which the 'Sefer Yetzirah' is founded, and which was known in tannaitic times…is here proved to be an old cabalistic conception. "

In fact, the belief in the magic power of the letters of the Tetragrammaton and other names of the Deity… seems to have originated in Chaldea (see Lenormant, 'Chaldean Magic,'   pp. 29, 43).


"Whatever, then, the theurgic Cabala was …,   the very fact that Abraham, and not a Talmudical hero like Akiba,   was at the close  introduced in the 'Sefer Yetzirah,'  as the maximum  possessor of the Wisdom of the Alphabet, indicates an old tradition, if not the antiquity of the book itself …

“The whole dualistic system of good and of evil powers, which goes back to Zoroastrianism and ultimately to old Chaldea , can be traced through Gnosticism;   having influenced the cosmology of the ancient Cabala before it reached the medieval one…

“The gradual condensation of a primal substance into visible matter, a fundamental doctrine of the Cabala, … is the ancient Semitic conception of the 'primal ocean,'   known to the Babylonians as 'Apsu'  (compare Jastrow, 'Religion of Babylonia'), and called by the Gnostics βύθος = (Anz, "Die Frage nach dem Ursprung des Gnostizismus," p. 98). "

The Chaldean religious tradition that was embraced by apostate Jews during their captivity in Babylon was delivered to subsequent generations by word of mouth.

According to Blavatsky, these disseminators of the Chaldean tradition in the few centuries before Yahwshua  were known as Tanaim:

“Kabalist.  From QBLH, Kabala, an unwritten or oral tradition.
The kabalist is a student of 'secret science',   one who interprets the hidden meaning of the Scriptures with the help of the symbolical Kabala…  The Tanaim were the first kabalists among the Jews;    they appeared at Jerusalem about the beginning of the third century before the 'Christian era'.   This secret doctrine is identical with the Persian wisdom, or 'magic'.” (Ibid. p.167)

The dictionary defines the Medieval Latin cabala as derived from the Hebrew word  “qabb-la  which means “received doctrine, tradition, from qibb-lâ,"   "to receive.”

According to the Jewish Encyclopedia, Cabalists claimed to have received these oral traditions, not from ancient Chaldeans, but from the Patriarchs and Prophets “by the power of the Holy Spirit.”

Here we can see the heresy of the ancient rabinnical heresy that has been brought  up to the present rabinnical times.  Nowehere in the Sacred Word of Yhwh  is there mention of Cabala nor are its doctrines insinuated as being of the Ruach Ha Kodesh.

“Cabala comprised originally the entire traditional lore, in contradistinction to the written law (Torah), and therefore included the prophetic and hagiographic books of the Bible, which were supposed to have been 'received' by the power of the Holy Spirit rather than as writings from Yhwh's hand ... "

Each 'received' doctrine was claimed as tradition from the Fathers...to be traced back to the Prophets or  even to Moses on Sinai...

The chief characteristic of the Cabala is that, unlike the Sacred Scriptures, it was entrusted "only to the few elect ones…'”

Because of its heretical nature, the Cabala was not generally promulgated among the Jews but remained the “secret doctrine” of “elect” Jews.

That is to say, certain Jews who were deemed worthy could comprehend hidden teachings in the written Torah and, through mystical techniques, make direct contact with “Elohim.”

Among these practices are rapid recitations of the “Holy Name of God” (YHWH, or Tetragrammaton), meditation on the 11 Sephiroth of the Tree of Life which they believe to be emanations of God, learning to use the 22 letters of the Hebrew alphabet as force-carrying energy patterns which serve as the building blocks of the cosmos, and, finally, transcending the space/time limitations of the physical world to realize one's “inner divinity.”

This “secret doctrine” has been preserved throughout the ages to the present time by a spiritual brotherhood who progresses individually to various stages of enlightenment and proficiency in the hidden wisdom—from “elect” to “adepts” to “wise men” to “adepts in grace”:

“Cabala...  The specific term for the esoteric or mystic doctrine concerning God and the universe, asserted to have come down as a revelation to elect saints from a remote past, and preserved only by a privileged few.

At first consisting only of empirical lore, it assumed, under the influence of Neoplatonic and Neopythagorean philosophy, a speculative character.
In the geonic period it is connected with a Mishnah-like text-book, the 'Sefer Yetzirah,' and forms the object of the systematic study of the elect, called 'mekubbalim' or 'ba'ale ha-kabbalah' (possessors of, or adepts in, the Cabala).    These receive afterward the name of 'maskilim' (the wise), after Dan. xii  and because the Cabala is called 10,  ('Hokmah nistarah' = the hidden wisdom), the initials from which  they receive also the name of   "adepts in grace "  (Eccl. ix. 11, Hebr.).” (Ibid.)


Cabala is a doctrine of demons that can be traced back to Judah's captivity in Babylon.   Both Ezekiel and Isaiah the prophets warned Judah and their followers this would happen as a result of their whoredom,  and still to this day many of Israel's modern descendants and called-out accept Caballah as a Kodesh doctrine!  This is an abominable sin.   Yhwh hates the mixture of profanity with His Kodesh Truth!